The top team in the Prairie Conference, the Regina Thunder host the Winnipeg Rifles in one of two semi-finals on Sunday afternoon.  The Thunder completed their second straight undefeated regular season and will have homefield advantage right through the Canadian Bowl playoffs.

During the regular campaign the Thunder won both meetings with the Rifles, but they were very physical and exciting games.   In the first meeting in Regina the Thunder claimed a two-point 24-22 victory kicking two field goals in the final quarter to pull ahead.  Then in the second matchup, this time in Winnipeg the Thunder escaped with a six-point 29-23 win after outscoring the Rifles 20-7 in the second half.

The Thunder have been very balanced in their offensive attack, while the Rifles lean on quarterback Bryson McNeil.   He did torch the Thunder secondary for 667 yards and five touchdowns in the seasonal series.

Both teams have a very good defence, the Thunder allowed 16-points a game, while the Rifles give-up 22 a contest.

These two teams have only met once in the CJFL postseason, and it was last year when the Thunder beat the Rifles 45-26 to advance to the Conference title game.   Surprisingly this year’s playoff game is only the second time these two franchises meet in the playoffs.

The playoff teams and matchups are set as the Prairie Conference wrapped up the regular season on Sunday.

For the second consecutive season the Regina Thunder claim an undefeated regular season after a blowout win over the Edmonton Huskies on Sunday afternoon gathering 436 yards running a balanced offence.

The Thunder scored 21 points in the first half on route to their eighth win of the season.  Quarterback Carter Shewchuk threw 191 yards and two touchdowns finding Rylan Sokul and Isaac Foord for those scores.   The passing game was complemented by a very strong run game lead by Sadik Sadik and his 101 yards on 10 carries. He also scored a touchdown as did Ryland Leichert and Ife Adebogun.

Over on the defence side linebacker Stephen Smith was outstanding with four solo tackles, 1.5 sacks, intercepted a pass, forced and recovered a fumble and had a knockdown. Kenten Effa was also very good with five solo tackles.

The Huskies meanwhile will finish third in the standings following the loss on Sunday and will hit the road for the playoffs.

They scored their 14 points in the even quarters.  Running back Alex Gayle had a game high 130 yards on the ground on 18 carries and scored a touchdown.  The other score was a 32-yard touchdown strike from Jordan Lane to Jordan Howe.

Next weekend the Thunder (8-0) will host the Winnipeg Rifles (4-4) in a Conference semi-final while the Huskies (5-3) will visit the Saskatoon Hilltops (5-3).

The Hilltops clinched a home playoff date after a blowout win on Sunday afternoon.  They would score 40 points through the first three quarters before the Colts finally got on the board.

The ground game did most of the damage to the tune of 355 yards led by Boston Davidsen.  He rushed for 146 yards on 16 carries and scored a pair of touchdowns.  Carter McLean and Jordan Levesque also got into the endzone.  Quarterback Trey Reider found Drake Douglas for a touchdown as well after completing eight passes for 108 yards.

Defensively the Hilltops rotated several players and forced five turnovers.  Steve Gilewicz and Isaac Rivalin each picked off a pass and Riece Kack had a sack and a fumble recovery.

The two touchdowns for the Colts happened in the fourth quarter when the game was already out of reach. Quarterback Nick Kennedy hit Alex Wahl for a score and Joseph Richardson ran in the only other touchdown.

The Hilltops (5-3) will host the Edmonton Huskies (5-3) in a Conference semi-final this weekend while the Colts (2-6) begin preparations for next season.

In a defensive controlled game, the Rifles got their record back to .500 with a four-point win and will hit the road for a Conference semi-final.

With time ticking down and the Wildcats nearing the endzone Brandon Kamenz came off the right side on third down, untouched and recorded his third sack of the game at the final buzzer.  In all, the Rifles had six sacks as Spencer Pilon added 2.5 to make life miserable for the Wildcats quarterback.

Offensively their lone touchdown was a two-yard run by back-up quarterback Thomas Hubbard in the second quarter.  Hubbard completed 12 passes for 152 yards in the game.

The Wildcats lone touchdown was also on a run play when Nathan Zacharias scored in the first quarter on a nine-yard rush giving his club the lead.   Their defence held them in the game recording three sacks and Will Downs intercepted a pass.

The game was the final one for head coach Darcy Park who announced he would not be returning to the Wildcats after over 20 years. 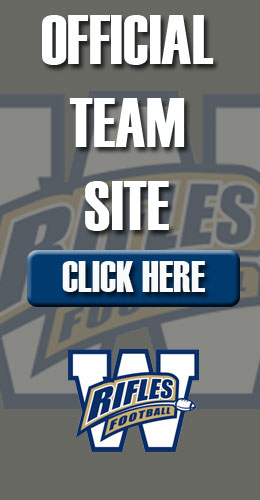