They advance to the Canadian Bowl

The Okanagan Sun are off to the 2022 Canadian Bowl after beating the Ontario champion St. Clair Saints 42-24 in Windsor on Saturday evening in the CJFL National Semi-Final.

The Sun used a massive first half scoring 28 points to put the Saints behind the eight-ball with a 28-3 halftime score.  However, the Saints didn’t roll over.  Instead, they came out of the locker room and outscored the Sun 14-0 in the third quarter to cut the lead to 11, but the margin was just too much, and the Sun tacked on another 14 points in the final frame to pave the way to the Canadian Bowl.

The BC champs opened the scoring at the 8:25 mark of the first quarter when pivot Dominic Britton found All-Star receiver Noah Bymak for a two-yard touchdown reception.  Britton would add a second touchdown pass in the first quarter, with just five seconds left he hit Mike O’Shea from 18 yards out to give them a 14-0 lead after one quarter.

In the second quarter the Saints got momentum when Billy Patterson Jr picked off a Britton pass as the Sun were driving.  However, on the very next play Saints quarterback Andrew Brush gave the ball right back as Tyler Turner intercepted his pass and returned it 40 yards for a touchdown.

After Saints kicker Connor Rafferty booted a 40-yard field goal the Sun offence went to work again.  With under two minutes before halftime Britton orchestrated a 55-yard drive capped off by a Jevon Garwood one-yard touchdown run to give his team a 25-point lead at halftime.

In the third the Saints adjusted using quick hitting passes and Brush’s legs to start to sustain some offensive drives.  They would strike at 7:02 of the third when Brush found Jared Hayes-Williams for a 31-yard touchdown pass.  Then two and a half minutes later on their next drive, Brush would pound it in from three yards out and suddenly the lead was cut to 11 and the Saints had life.

That was as close as they would get as Garwood added two more touchdowns in the fourth quarter on runs of 33 and 13 yards to cap the victory.

In the end Garwood was named the Offensive Player of the Game with three touchdowns on 19 carries for 157 yards.  Britton meanwhile completed 19 passes for 210 yards and the touchdown passes to Bymak and O’Shea.

Defensively the Sun bent but didn’t break in the second half.  Turner intercepted two passes on the night and had two tackles in the game. All-Star Kelon Thomas was a huge factor putting pressure on the Saints offence on almost every snap.

Brush led the Saints on the offensive side with 16 completions for 213 yards and one touchdown to Hayes-Williams.  He was equally as effective with his legs rushing 13 times for 73 yards and two touchdowns.   Hayes-Williams was outstanding in his final junior football game with 14 receptions for 198 yards and the major.

All-Star Tynan Braymiller was the best Saints defender and was named the Defensive Player of the Game with seven tackles and a sack.

The Sun will now play for the Canadian Bowl for the first time since 2015.  They will travel to either Regina or Saskatoon on November 12th to play for the national title.

Players of the Game: 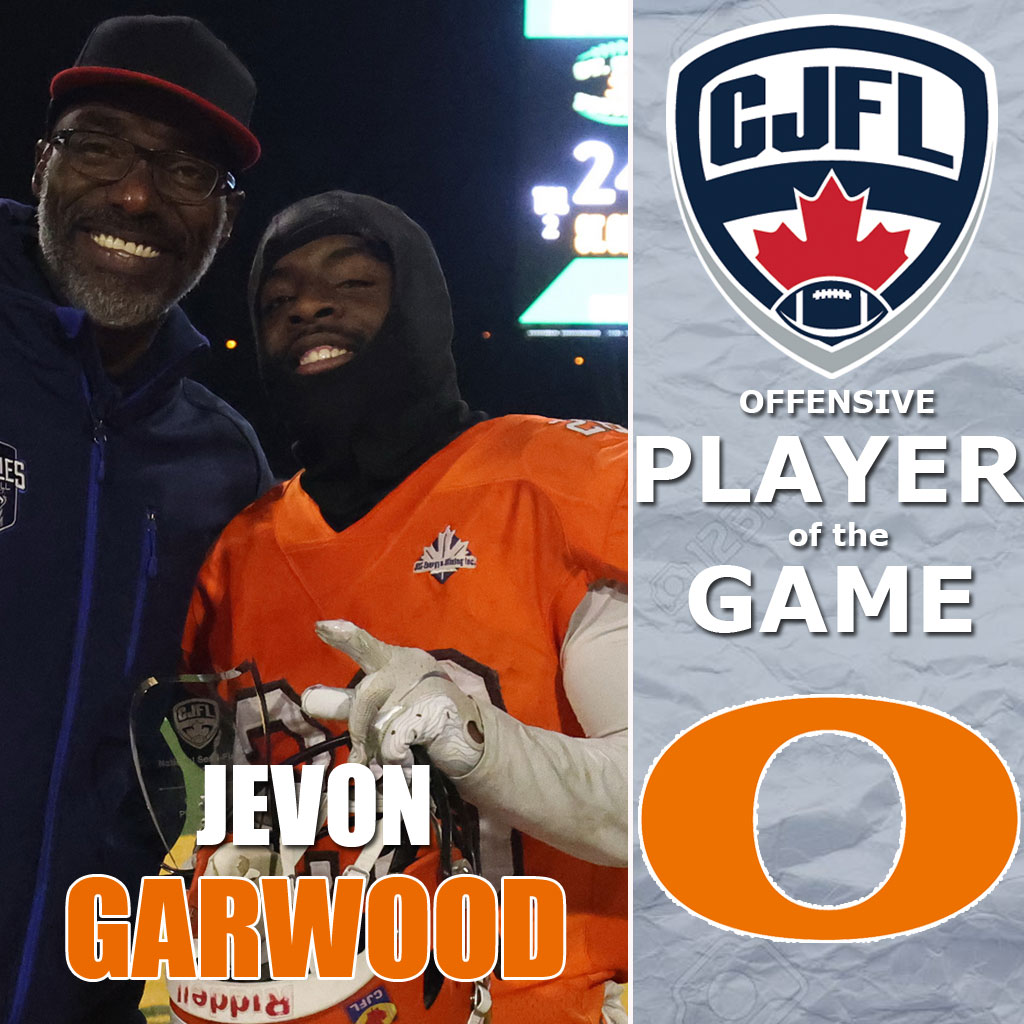 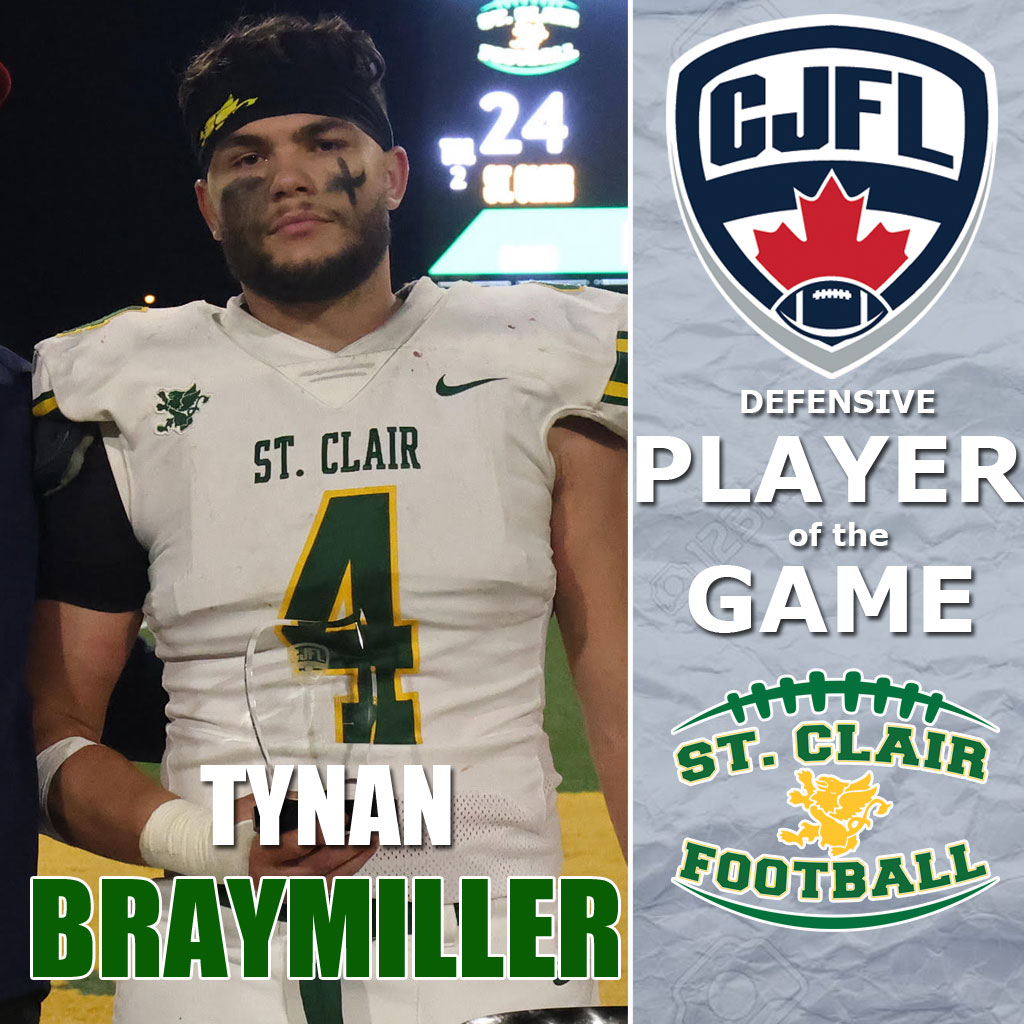 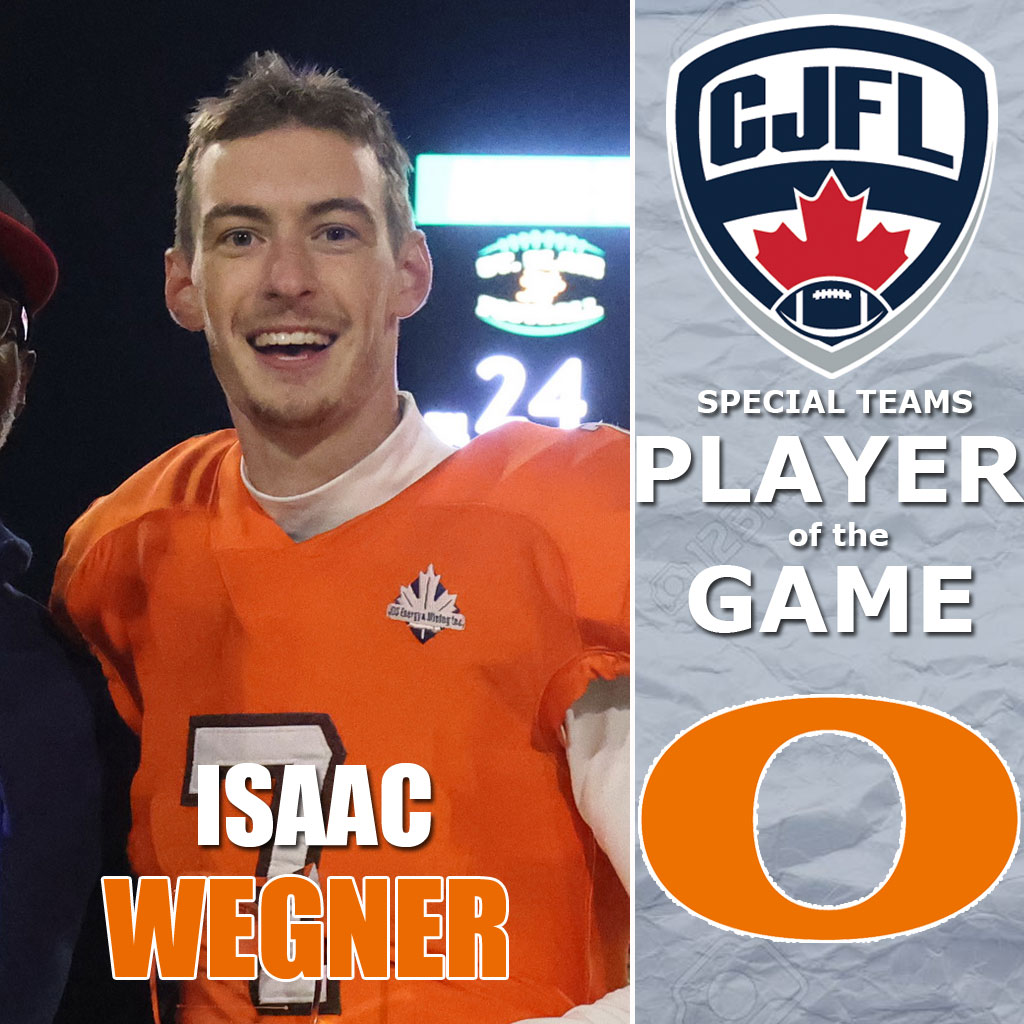