The two-time defending BC champs are reloaded and ready

The two-time defending Cullen Cup champion Langley Rams are hungry for their first ever Conference three-peat when their 2021 schedule opens on September 11.  They will begin the season when they visit the VI Raiders at their brand new home of NDSS Field in Nanaimo.

The Rams will return several players from their 2019 Canadian Bowl team and should be the BC Conference favourite when the season opens.

As the season approaches the Rams are excited to launch a new website in the coming weeks where fans can keep up to date with the club, their favourite players and find links to watch the live streams of each game.  The team’s board also looks a bit different this season with familiar faces in new roles including President Derek Henneberry, VP Chad Henderson, Treasurer Shawn Ziegler and Directors Rob Shearar, Chris Rohan and Shawn Dolynski.

RB Andrew Pocrnic – the reigning CJFL Outstanding Offensive Player of the Year leaves a huge hole at the running back position.  In 2019 he set a new CJFL record for rushing touchdowns in a single season with 26 and collected 1199 yards on 163 carries.  He was signed by the BC Lions as a territorial protected player back in December and is enjoying his first CFL training camp.

DL Partap Sandhu – He was a force on the line in 2019 with 6.5 sacks, eight solo tackles and a pair of assisted stops.

DL Nick Sorace – He’s another big loss on the Rams line after a terrific 2019 season.  He recorded 13 solo tackles, had an assist and 2.5 sacks

DB Kyle Charot – He’s a two-time All-Canadian and is primarily matched up with the opposition’s top receiver.  He can play all over the field and compiled 21 tackles in 2019 along with 5.5 sacks, four knockdowns, a fumble recovery and picked off two passes, returning one for a touchdown.

RB/R Maximilian Joseph – He’s a threat each and every time he touches the ball and will be looked upon to lead the running attack after the departure of Pocrnic.  In the 2019 Canadian Bowl he scored the lone touchdown coming out of the backfield.

OL Ross Baykey & Nikos Lazarakas – they are two players who have been extremely important pieces of the Rams offensive attack both on the ground and through the air.  Without these two players, Pocrnic who not have had the season he did in 2019.

LB Cole Barron – In 2019 Barron was a massive piece of the Rams stellar defence.  He made 28 solo tackles, had two assisted stops, forced a fumble and had 6.5 sacks.  He’s back for the 2021 season bigger and stronger and has a hunger to get back to the National Championship game.

DB Nathan Murray – The Rams are hoping he can have an even larger impact this season after his 2019 performance.  That year he had five interceptions, 16 solo tackles, had a knockdown and an assisted stop.

DB Michael Calvert – a newcomer to the Rams, but no stranger to football after playing the 2019 season with the UBC Thunderbirds.  The Rams are counting on him to have an immediate impact in the secondary lining up beside the likes of Charot and Murray.

The Rams open the season with three straight road games traveling to Nanaimo, Kelowna and will play the Valley Huskers in Abbotsford part of a CJFL Showcase Game before their first home game on October 2nd when they welcome the Westshore Rebels. 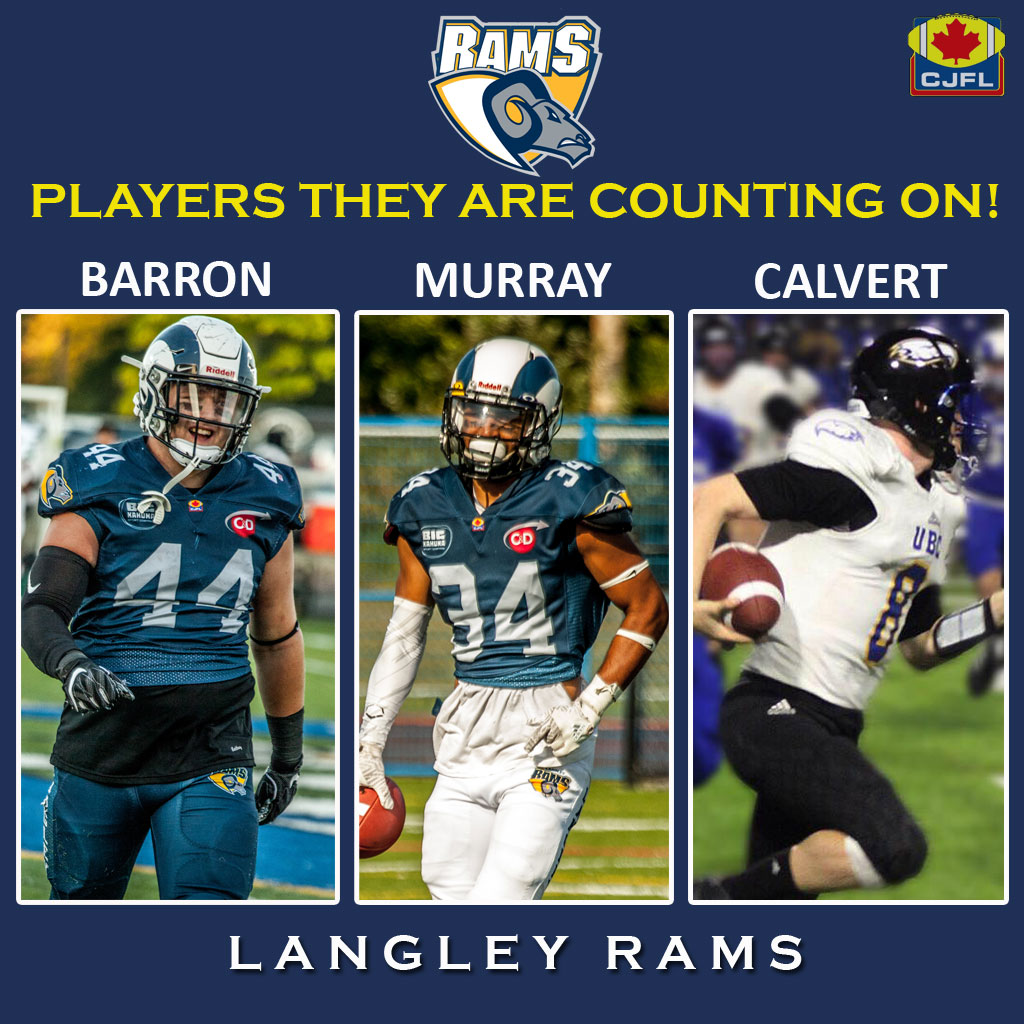