The defending Ontario Conference champion London Beefeaters are anxious to get back on the field like most CJFL teams.   They have not had a chance to defend a Conference title since the 2013 season after winning in 2012.

They will have plenty to prove to the rest of the CJFL but will have a different look when they kick-off.

The biggest and most visible change is at the head coach position.  Jesse Maddox, who led the Beefs to the Conference title in 2019 moved to BC, stepping down from his role.   In November of 2020 the Beefeaters hired veteran coach Gavin Lake who has spent time at the CFL and CJFL levels in previous roles.  Despite the many challenges that COVID presented, Lake has done an excellent job connecting with current players as well has hit the recruiting trail to great success.   He has also been able to retain several coaches from the 2019 staff and has brought it some new faces.

The Beefeaters are bringing back their annual golf tournament this July after a hiatus of a couple of years along with a silent auction to help with their fundraising efforts.

They are also getting set to launch their second Beefeater beer in partnership with a local brewing company.    The beverage appropriately entitled “2nd and Goal” will be available in late July or early August, following a very successful brew last year, “First and 10.”

OL Matt Bettencourt – he was CJFL All-Canadian in 2019 and has decided to step away from football after a decorated career which included a Vanier Cup championship with Western University.

DB Tanner Gaskill-Cadwallader – he was a CJFL All-Canadian in 2019 and is now chasing his CFL dream after getting drafted by the Winnipeg Blue Bombers.  In 2019 had collected 16 tackles, had a pair of sacks, two knockdowns and three interceptions including one returned 52 yards for a touchdown.

DB Wily Mboko – he’s taken the next step and has become a student athlete enrolling with St. FX.  In 2019 he collected 14 tackles for the Beefeaters, as well knockdown a pass and recovered a fumble.

WR – Spencer Foster – he is a big part of the Beefeaters offence in both the passing and running games.  In 2019 he caught 16 passes for 237 yards and had a team high five touchdowns.

LB Codey McRoberts – he was solid for the Beefs in 2019 tallying 11 tackles, a sack, had six knockdowns, forced two fumbles and had an interception.

Other than more offensive and defensive linemen like every football team on the planet, the Beefeaters are still in need of a few positions before the season opens up.  They are in the process of identifying a placekicker and punter and they have an open competition at the kick returner position.

The Beefeaters will be counting on three new comers to make an immediate impact in 2021.

Devon Smith can play multiple positions including quarterback, receiver and can play in the secondary.

Jordan Fletcher will need to be key member of the defensive line and putting pressure on the oppositions quarterback.

Mathieu Labelle – Like Fletcher, Labelle will be asked to put pressure on the quarterback from the defensive line and disrupt any plays coming out of the backfield.

The Beefeaters and the rest of the Ontario Conference are finalizing their 2021 schedule and are hopeful for either a full season or modified schedule.  Full details will be released soon. 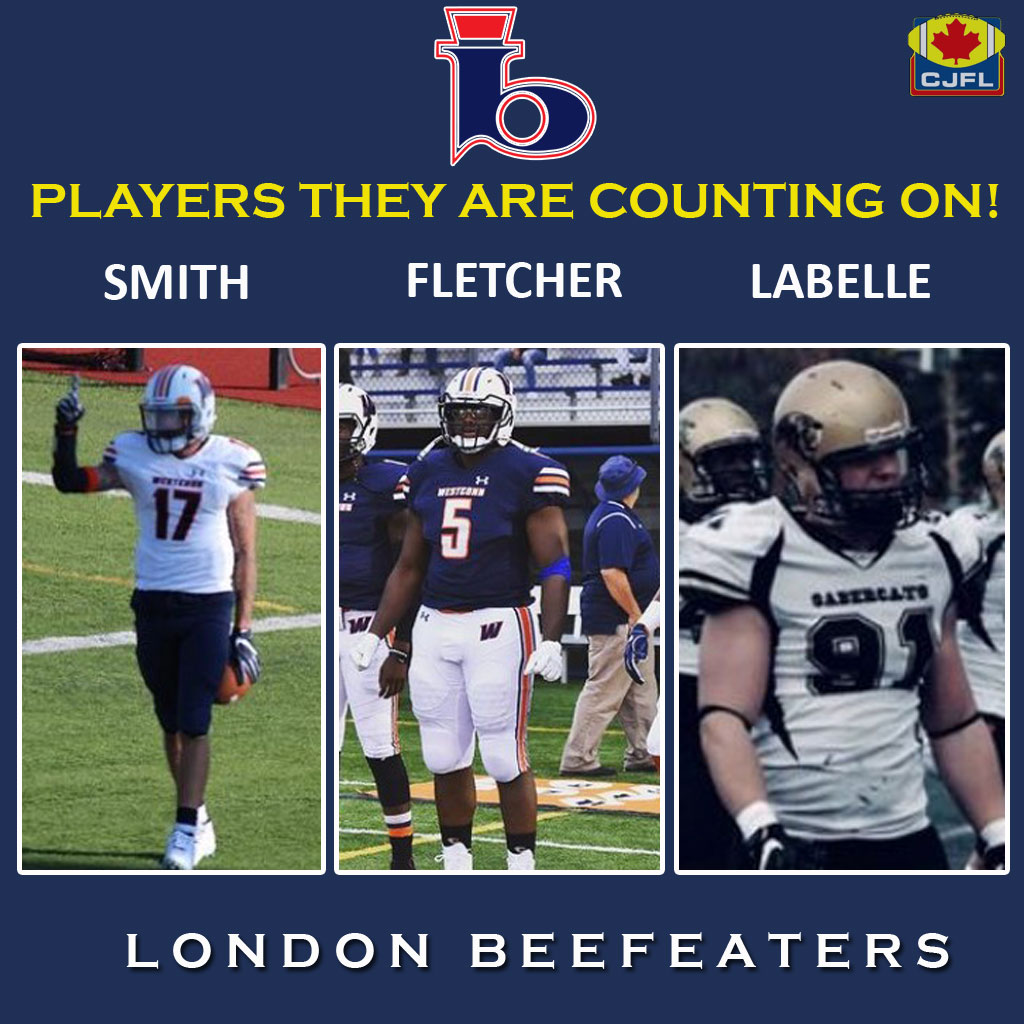