The last game the VI Raiders played in was on October 26, 2019 in a BC Conference semi-final.  Plenty has changed since then and the Raiders are itching to get back onto the field here in 2021.

They have a lot to prove this season after three consecutive third place finishes in the last three seasons.  They have not hosted a playoff game since 2015 and would like nothing more than to host the Cullen Cup championship game on a brand new field in Nanaimo.

Little did they know that their 13-6 victory over the Valley Huskers on October 19, 2019 would be in reality their final game at Caledonia Park.  After several victories including two Canadian Bowl titles on the natural grass surface of Caledonia Park, the Raiders are moving.   During this extended off-season the ball club struck an agreement to host all their home games and all their practices on the new field turf at NDSS Stadium just below the campus of Vancouver Island University.

The Raiders have been busy as of late, launching a brand new website and have a new major partnership with PRIME Performance.  Along with the partnership comes a new strength and conditioning coach in Clay Smith.   The club has brought back alum Trevor Pelland as the new marketing/social media director after playing with the Raiders from 2014-2017.

QB Jake Laberge – He’s been the heart of the Raiders offence for the past four seasons since becoming a starter in 2016, his rookie campaign. In his four previous seasons with the Raiders Laberge has combined for 432 completions and 6860 yards with 54 touchdown passes and a 52.4% completion percentage.

DL Doyle Westlund – He will look to build upon three strong CJFL campaigns where he has tallied seven sacks, 18 tackles and nine assisted stops.

DB Gevhahn McNally-Hardisty – Like Laberge, he’ll enter his fifth and final season and the Raiders are hoping this will be his best.  In his fourth seasons he has tallied 15 interceptions, 79 tackles and is often called upon to shut down the opposition’s best receiver.

RB Jason Henderson – In 2019 Henderson carried the ball 38 times for 220 yards and had a major.  He’ll look to be the featured back in 2021 and follow in the footsteps of some very strong Raiders running backs including Andre Goulbourne, Rhett Williams and of course arguably the best CJFL back in history, Andrew Harris.

LB AJ Maher – A former Kamloops Bronco, Maher comes to the Raiders after seven solo tackles in 2019.  The coaching staff are counting on him to anchor their defensive scheme this upcoming season.

DL Nick Robinson – He will be asked to fill some big shoes and have an immediate impact on the defensive line.  In 2019 he collected six tackles, had three sacks and forced a fumble.

Like all CJFL teams the Raiders are hopeful for a 2021 season and to get back to a sense of normality with either a full or modified schedule.  The Raiders and the rest of the BC Conference are busy putting together a few different options and await the remaining restrictions to be lifted. 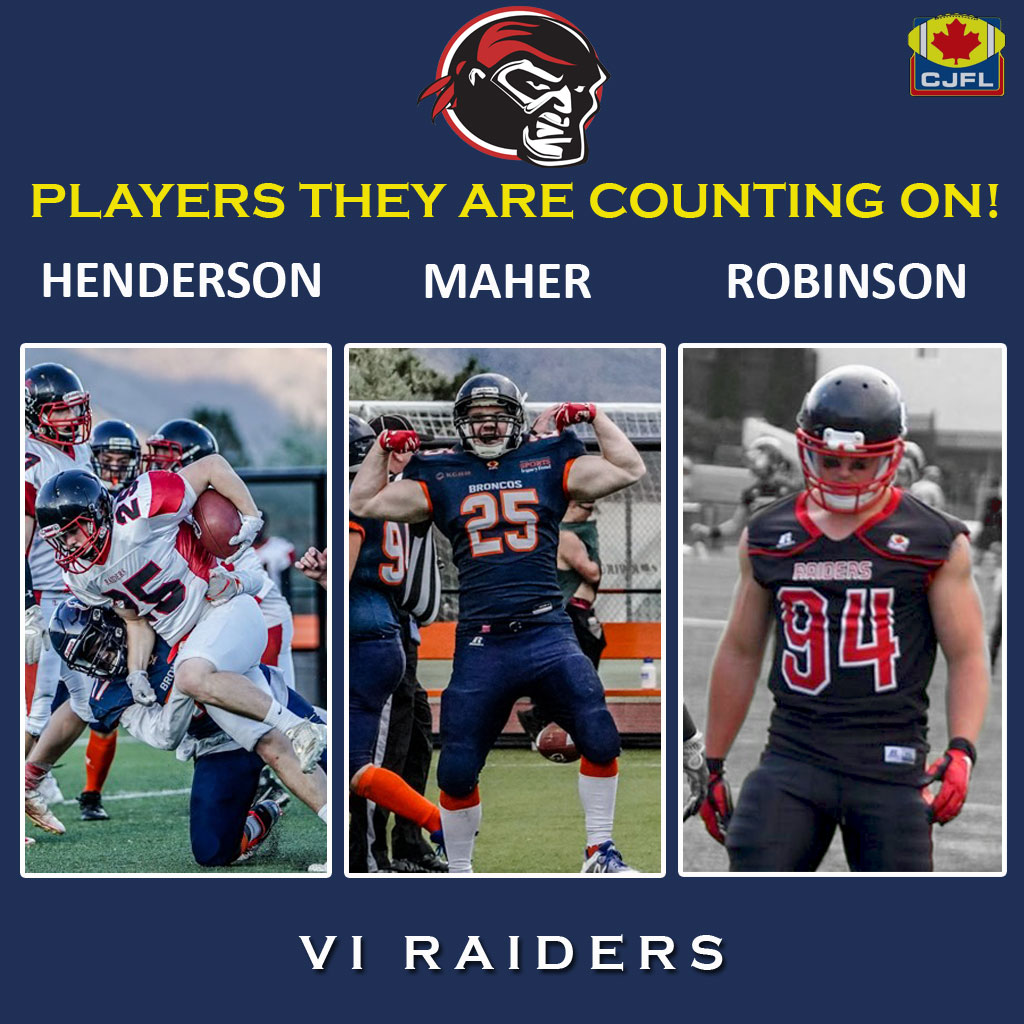