What's new, who did they lose and who are they counting on

Needless to say it’s been a while since the Regina Thunder and the rest of the CJFL have seen any live action.  The Thunder specifically have not played a game since October 20, 2019 when the lost in the Prairie Conference semi-final to the Edmonton Huskies.

Coming into this hopeful 2021 season the Thunder have set the bar and their standards very high with several players back from 2019, coupled with talented new recruits.  The coaches, led by head coach Scott MacAulay and the Thunder Board of Directors have put in a lot of time and effort into this upcoming season.

QB Blake Scherle – The starting pivot was simply outstanding during the 2019 season and was named the CJFL All-Canadian quarterback. He completed 58.3% of his passes, connecting 144 times for a Conference high 2196 yards.   His 17 touchdown passes were tied for the most in the Conference and his pass efficiency rating was 93.8.

OL Logan Ferland – Just how good was Logan Ferland as a Thunder?  He was a three-time CJFL All-Canadian, was a Conference All-Star and spent the 2019 season on the Saskatchewan RoughRiders’ practice roster.  He officially signed with the Riders in December of 2019 and should be in green and white later this summer.

DL Carson Bell – He was a CJFL All-Canadian following the 2019 season and was a beast on the line for the Thunder.  He collected 2.5 sacks, 11 tackles, 13 assisted stops and had a fumble recovery.  He will be missed as he pursues a degree and a football career at the University of Saskatchewan.

LB Davin Williamson – He is the heart and soul of the Thunder defence leading them with 26 tackles during the 2019 season.  He also tallied eight assisted tackles, had a knockdown, recovered a fumble and had an interception.

DL Jordan Tholl – He is a force on and off the field.  On it he tallied 2.5 sacks in 2019 along with six tackles and eight assisted stops.  Off it, he showed generosity and kindness involving himself with several charitable organizations and for his efforts was named the CJFL Past Commissioner award winner for incredible community involvement.

OL Matthew Hajewich – Without Logan Ferland on the Thunder line, Hajewich will be looked upon to anchor the line and give the new quarterback time to throw.

The Thunder coaching staff believes they have the starters and depth to make some noise in the Prairie Conference this upcoming season.  One of the only spots they feel they could use a few more bodies is the same position all CJFL teams need; players on both the offensive and defensive lines.

WR Rylan Sokul – In 2019 the Thunder boasted the top two production receivers as Ethan Douglas and Isaac Foord were the only two to each collect over 600 receiving yards.  Douglas led the Conference with 631 yards and seven touchdowns.  That said the Thunder are counting on Sokul to put up the same kind of production numbers.  In 2019 he collected 20 receptions averaging 17.4 yards a catch and caught three touchdowns.

LB Ryan Mills – Along with Williamson the Thunder linebacker position is stacked.  They are hopeful to see Mills breakout after making 10 tackles and two knockdowns in 2019.

DB Bobo Kisusari – The Thunder secondary will be a strength for this team and it’s led by Kisusari.  In 2019 he made two interceptions to compliment his 16 solo tackles.

The Thunder like all CJFL teams are hopeful the 2021 season will move forward with either a full or modified schedule.  They are currently scheduled to kick-off the season on August 8th on the road in Edmonton against the Huskies. 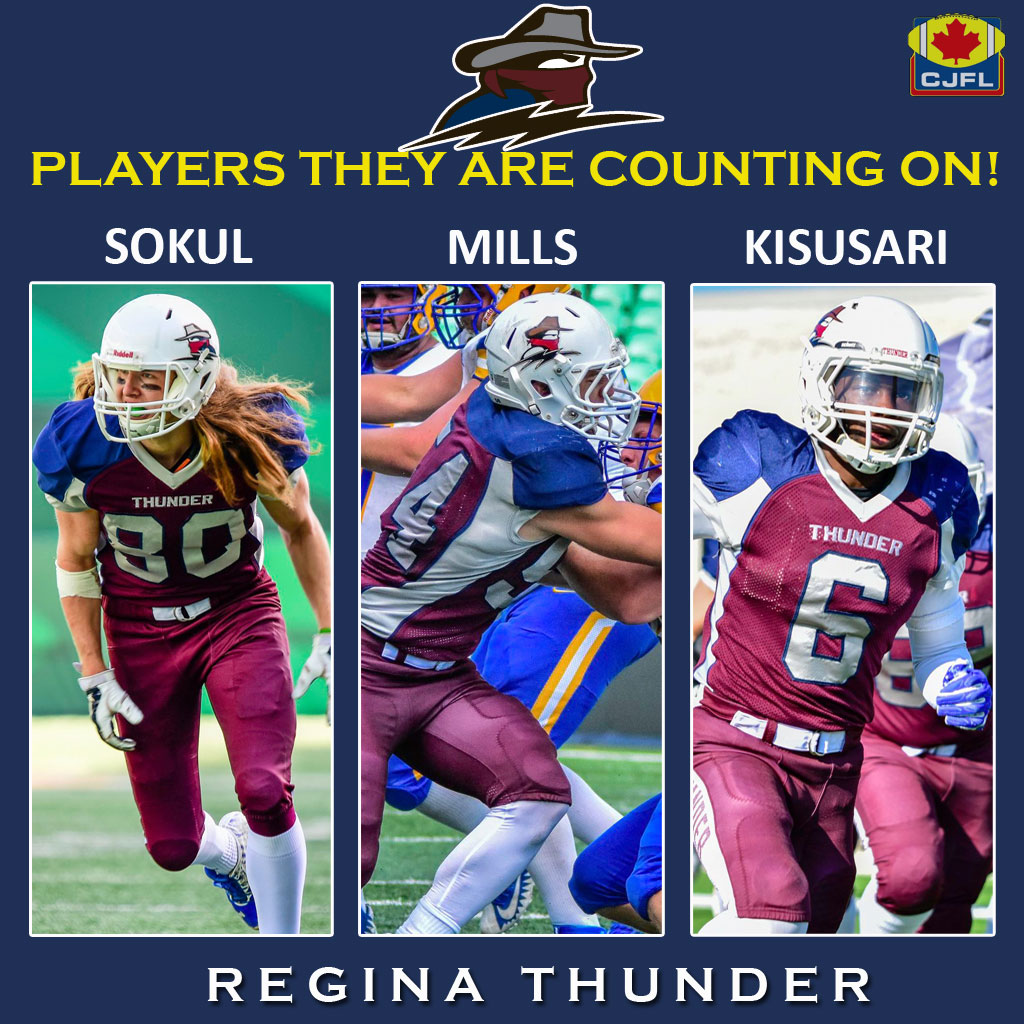