A proud member of the CJFL since 1963

Since 1963 one of the class organizations of the Ontario Conference has been the Hamilton Hurricanes.  Each season the Hurricanes are at or near the top of the standings fighting for a Conference title.  In just their second season they finished with a 4-1-1 record and qualified for their first playoff appearance.   They lost that first playoff game, but it set the tone for the 1965 season.  They finished 8-2 and won their first playoff game that year, a 13-1 win over the Etobicoke-Lakeshore Bears and punched their ticket to the final.

After appearing in the Conference final five straight seasons, the Hurricanes finally tasted victory in 1969 beating the Burlington Braves 14-7 in the two game series.   Unfortunately for the Hurricanes they would fall in the Eastern Ontario semi-finals 29-23 to the Windsor AKO Fratmen.  This was the first chapter in the Hurricanes-Fratmen rivalry that has lasted ever since.

The 1972 season was perhaps the most memorable in Hurricanes history.    That year they crushed the West Division of the Ontario Conference with a 10-0 record outscoring the opposition 307-89.  In the semis they blasted the Oshawa Hawkeyes 59-0, and then beat the undefeated West Division champion Scarboro Rams 22-14 in the two game series.    Following that win, the Hurricanes beat the Quebec Conference champion Ottawa Sooners 11-7 in CJFL East championship and punched their ticket to the Leader-Post Trophy (Canadian Bowl) game in the neutral site of Saskatoon.

The Hurricanes have been fortunate to play the majority of their home games on a CFL field.  In the past they would host teams at Ivor Wynne Stadium and today they welcome in their Ontario Conference rivals to Tim Hortons Field, both the home of the Hamilton Tiger-Cats.  In 2019 the Hurricanes played a couple of their home games in Brantford, 30 minutes from Hamilton at the Wayne Gretzky Sports Complex.  All of their locations have been outfitted in field turf.

Over the course of their history the Hurricanes have been blessed with several outstanding players.  Quarterback Jason Hayes helped them continue their winning tradition and is now their all-time winningest coach, Linebacker Aram Eisho is the only player to be named the CJFL Defensive Player of the Year three straight times from 2008-2010.  Quarterback Jake Marquette was named the CJFL Offensive Player of the Year in 2018 setting various team records. 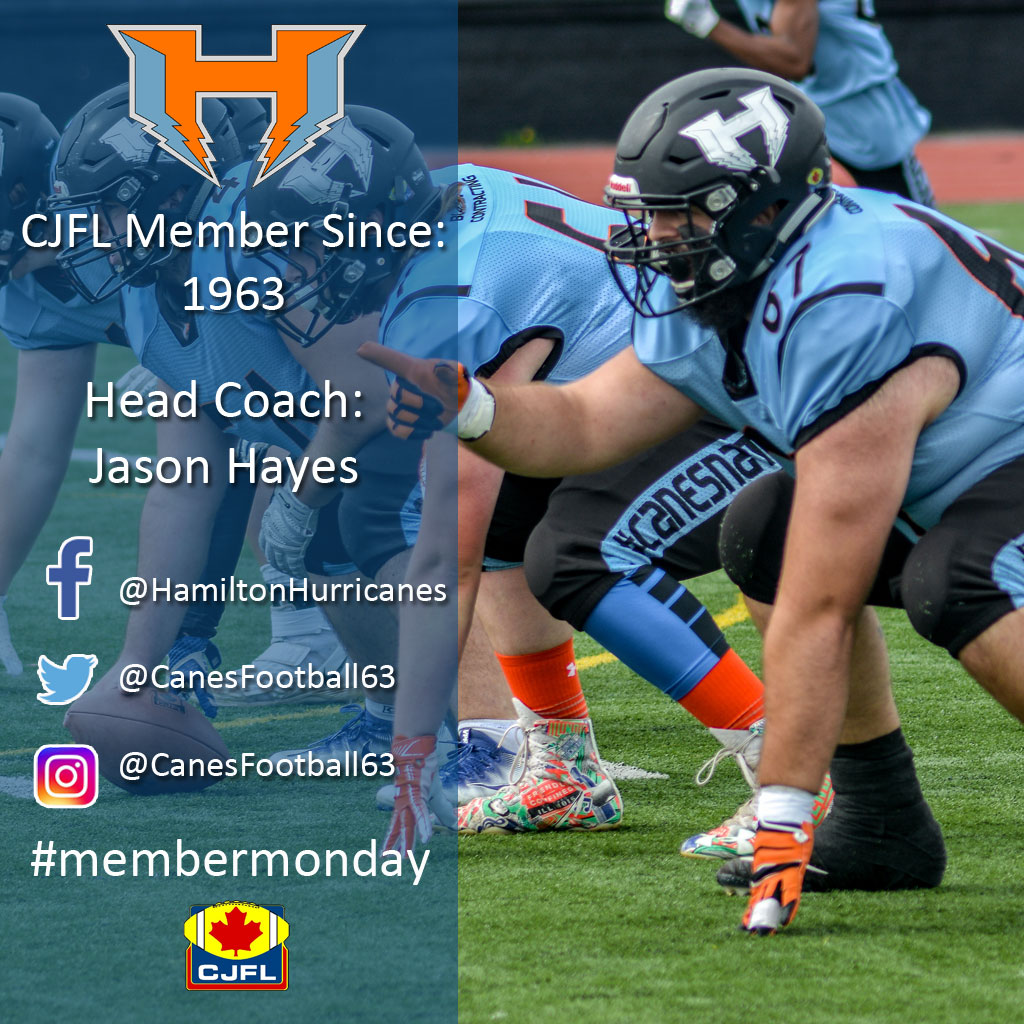