One of the oldest CJFL franchises

The Fratmen franchise in Windsor, Ontario is one of the oldest in CJFL history playing their first season in 1945 as the Windsor AKO Fratmen.  At that time they played in the Western Ontario Junior Ontario Rugby Football Union and played just four games. Clearly that first year was an indication of how strong the Fratmen would become after finishing their inaugural year undefeated at 4-0.

In their 72 year history the Fratmen have compiled an incredible overall regular season record of 396-151-14, while they are 73-57-1 in the post season.  They are also the last Ontario team to win the CJFL Canadian Bowl which was an exciting accomplishment in 1999 on their home field.

Back in 1945 the undefeated Fratmen only played in their own division and despite finishing 4-0; they didn’t play another game that year.  The following season the Fratmen finished 7-1, tied atop the standings with the Assumption College Purple Raiders.  The pair met in the West Division semi-final where the Raiders beat the Frat in the best of three series 2-0 outscoring them 42-8.

The next season (1947) was a strange one.  The Fratmen again faced the Raiders in the semi-finals and again the Raiders won.  However the Raiders then declined to play any more playoff games so the Fratmen by default took their place.  They went on to beat the Petroria Hard Oils 10-5 and punched their ticket the Ontario final.  The game was played on December 13, 1947 and the Fratmen claimed the victory 11-2 over the Hamilton Jr. Wildcats thus beginning the bitter rival between Windsor and Hamilton.

In 1952 the Fratmen had their best season to date.  At that time there were eight divisions across the country in the CJFL with the Fratmen playing in the Junior Ontario Rugby Football Union.  The club finished 6-0 outscoring their opponents 237-26 in the process.  In the post season they would defeat the Toronto Parkdale Lions 22-16 and the Lakeshore Flyers 22-6 to win the right to host the Canadian championship game, at that time called the Leader Post Trophy, today we know it as the Canadian Bowl.  In front of 4300 fans the Fratmen won their first national title after beating the Edmonton Wildcats 15-12.

The following season the defending Canadian champions again had a magical campaign going undefeated in the regular season.  Their playoff run saw them breeze through with wins over the Sarnia Knights, Hamilton Jr. Tiger-Cats and a 25-17 victory over the Quebec champion Verdun Sham-Cats.  The Fratmen again found themselves in the Leader-Post Trophy game, however this time traveled to Saskatoon to meet the powerhouse Hilltops who clubbed the Frat 34-6 to dethrone the champs.

The 1954 season saw a familiar path for the Fratmen who for the third straight year were right back in the national championship game.  They hosted the Winnipeg Rods and beat them 13-9 for their second Leader-Post Trophy in three years.

It was déjà vu all over again in 1955 when the Fratmen and Rods again played for the national championship title.  However this time it was the Rods that came out victorious with a 19-13 win.

The Fratmen didn’t get back to the big dance again until 1996 when they fell to the Hilltops.  However three seasons later the Fratmen won back the national crown with a thrilling 32-29 victory at home over the Okanagan Sun.

In all, the Fratmen have three national championship titles to their credit along with an incredible 21 Conference championships and 29 first place finishes.

Following the 2019 CJFL season another exciting and historical moment in the Fratmen history took place when the organization was purchased by the St. Clair College Student Athletic Association.  This year if the season is played the franchise is now the St. Clair Fratmen dropping the AKO moniker.    They will play their home games at the brand new Acumen Stadium which was finished in 2020.

Throughout their history the Fratmen have had some outstanding players in their program.  Tommy Grant was a 1955 Conference All-Star that went onto play in 14 CFL seasons reaching the Grey Cup nine times, winning four rings.  He ended his career with 54 touchdowns, 6542 yards on 329 receptions.   He was inducted into the CFL Hall of Fame in 1995.   Jerry Kauric is also a former Fratmen that played on national stage in four seasons with the Edmonton Football Club.  As a matter of fact he kicked a 49 yard field goal in the dying seconds of the 75th Grey Cup giving his Edmonton team a 38-36 win over Toronto in 1987.  Three years later Kauric kicked for the Cleveland Browns in the NFL in 1990.  They only won three games that season, two of them coming courtesy of a game winning kick by Kauric.

Today the Fratmen have two alumni on CFL active rosters including Dillon Grondin (LB) of the Hamilton Tiger Cats and Llevi Noel (WR) of the Toronto Argos.

In 2021 the Fratmen will again be led by long-time head coach Mike LaChance who enters his 18th season.  This year however they will look a bit different in their new green and gold uniforms.  The winner of the Ontario Conference this season will host the Canadian Bowl and the Fratmen and St. Clair College would like nothing more than to show off their new digs to the rest of the country in that game. 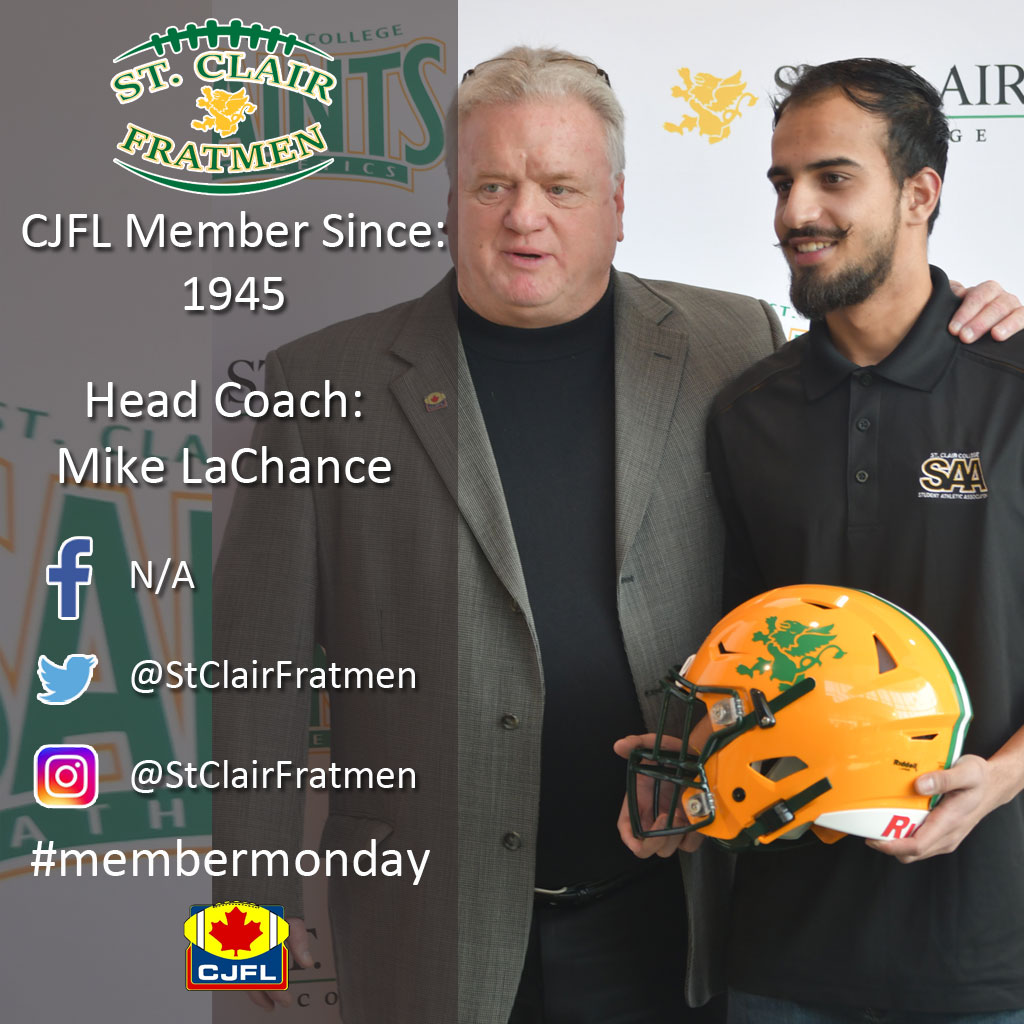