One of the most dominating franchises in the Ontario Conference of the CJFL in the early part of the 2000s was the St. Leonard Cougars; the only team in Quebec and they were led by legendary coach Tony Iadeluca Jr.

He coached an even 10 seasons from 1999 – 2008 and the Cougars ruled the Ontario Conference.  Under Iadeluca’s tenure the Cougars won eight straight Conference championship titles from 2000 – 2007.  That first championship in 2000 was just the Cougars second in franchise history and first in six years.

The Cougars won an incredible 36 consecutive regular season games from 2004 -2008 and Iadeluca was named the CJFL Gordon Currie Coach of the Year twice during that span; 2004 and 2007.

During his time in Montreal, Iadeluca led the Cougars to three Canadian Bowl appearances.  In 2002 they played the Saskatoon Hilltops strong losing by just two points 20-18 in front of 700 fans in Montreal.  Then in 2005 they lost to the Edmonton Huskies 34-15 in Montreal with 900 fans in the stands, then two years later the Cougars fell 26-3 to the Hilltops in the last CJFL neutral site Canadian Bowl as the game was played in Winnipeg.   On route to that 2007 national championship the Cougars beat the VI Raiders in the national semi-final; it’s the last time a team from the Ontario Conference has won a national game.

Over his decade on the sidelines with the Cougars, Iadeluca compiled an impressive overall record of 82-14.  Of those 82 wins, 68 were in the regular season which is second most all-time in the Ontario Conference and eighth most in CJFL history.

Following his time in the CJFL, Iadeluca became the head coach at College Andre-Grasset, a Cegep school in Montreal that competes in a College football division 1 in Quebec, part of the RESQ Conference.

With his tremendous record in the Ontario Conference, Tony Iadeluca Jr is without a doubt a "CJFL Legendary Coach." 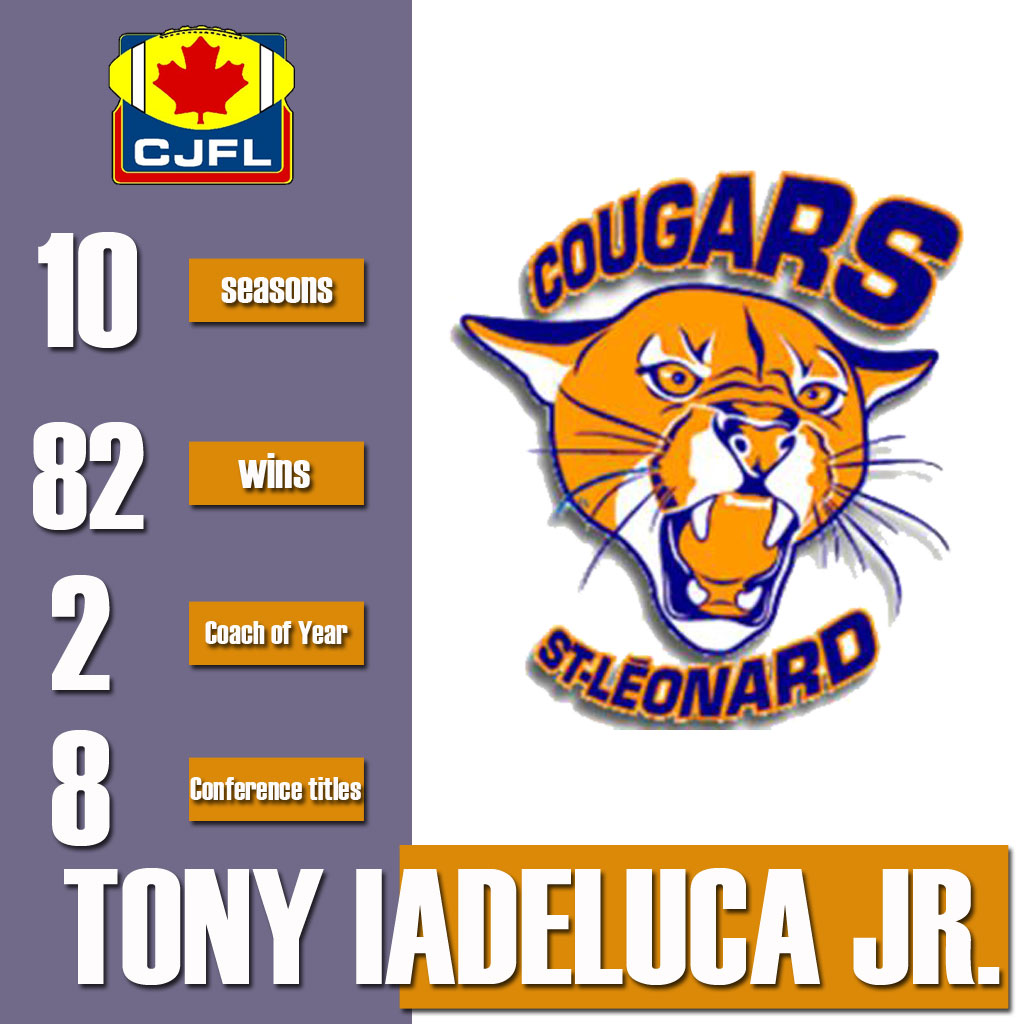