Lorne Cullen has a remarkable football story dating back to 1944 as a player and eventually having the BC Conference championship trophy named after him in 2001.  Lorne Cullen is most definitely a CJFL Legendary Coach.

As a player in 1947 Cullen was a member of the Vancouver Blue Bombers who defeated the Hamilton Tigers in a two-game total point series 19-8 for the Canadian championship.  It was the first official year of the “Junior Big Four” which is currently the BC Conference as we know today.  The title was the first Canadian championship by a junior team from British Columbia.

In the playoffs Cullen guided his teams to a 13-6 record with those eight titles, still more than any other BC Conference coach.

After all his great success the BC Conference decided to name the Conference trophy as the “Cullen Cup,” awarded to BC champion each season.

In 2011 Cullen was inducted into the BC Football Hall of Fame with the following nomination:

In 1944, Lorne started his football career at King Edward High School playing for Ranji Mattu at the age of 15. Lorne played on both the Junior and Senior High School teams at the same time as receiver and quarterback. On weekends he played Community Football with the Vancouver Blue Bombers Junior B team and subsequently with the Senior Bombers, an organization he would be connected with for over 25 years. Learning the coaching trade under Mattu, Lorne took over the reigns as head coach in 1950, and retired in 1968. Lorne became an assistant coach in 1948 at his former high school, King Edward, and became head coach in 1951. Lorne coached through the 1960 season, winning numerous championships. Lorne also acted as Head Coach of the Vancouver Cubs in 1953 (the Cubs formed the foundation for the BC Lions in 1954). Over his 19 years he compiled a record of 78-29-2, with his teams winning 9 BC Championships. Lorne was a salesman for Sparling Sporting Goods (on Granville Street) and Cullen Sport, where he continued his strong relationship with High Schools, Community and Universities.

Lorne Cullen passed away in 2018 and left behind an incredible legacy on and off the football field.  He’s our next selection as a CJFL Legendary Coach. 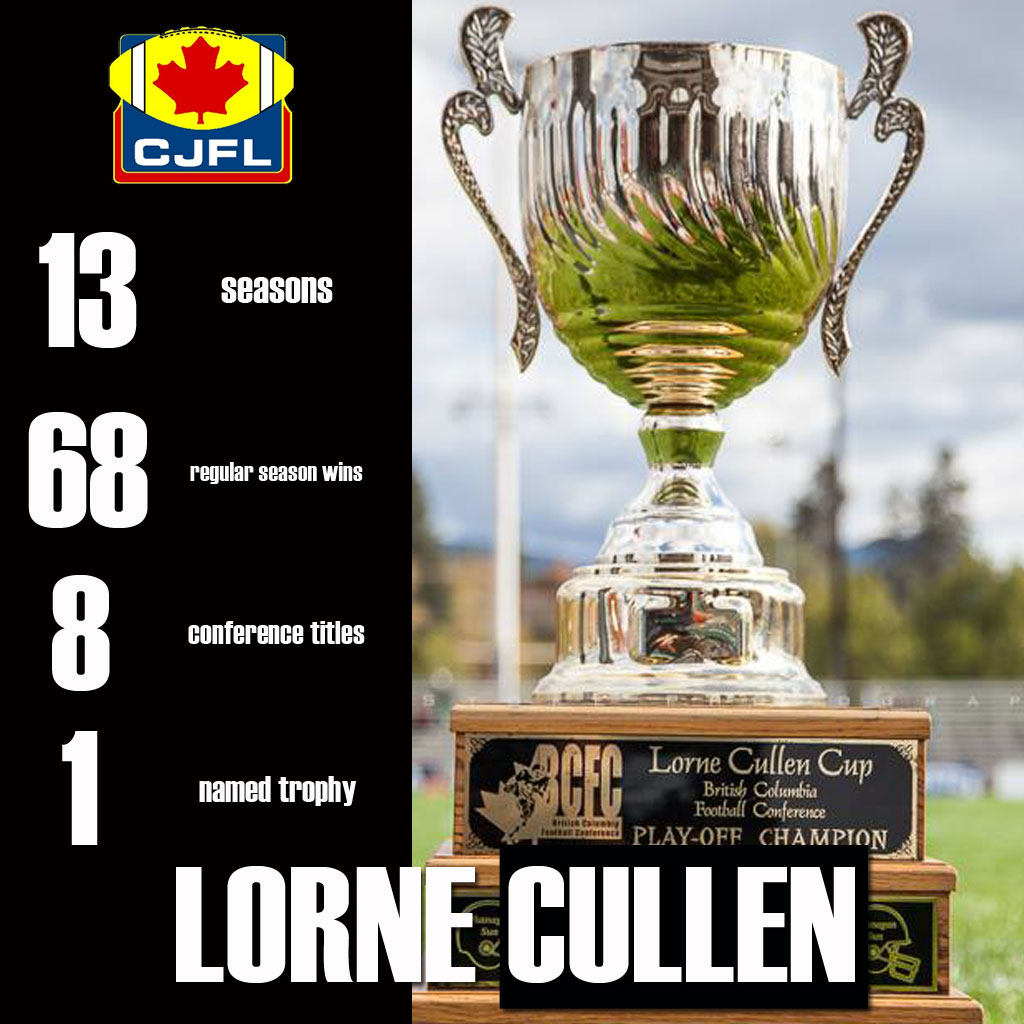