A back to back Canadian Bowl champion

The Calgary Colts were a dynamic force during the 1989 and 1990 seasons winning back to back Canadian Bowl titles behind head coach Keith Kendal.

In 1989, Kendal had the Colts hitting their stride at the perfect time heading into the playoffs.  They were lucky enough to sneak into the post season finishing with a 3-3-2 record, good for fourth in the Prairie Conference.  They matched up with the first place and top team in the country, the Regina Rams in the Conference semi-final and upset them 38-33.  That set up a date with the second seeded Saskatoon Hilltops in the Conference final, a team they had tied in the regular season.   This time they needed a last second field goal to upset the Hilltops 33-30 to win the right to host the Burlington Jr Tiger-Cats in the Canadian Bowl.  In front of 1,375 fans at McMahon Stadium in Calgary, the Colts took down the Ti-Cats 23-6 to win their first ever national title.

“It was one of those things when all of a sudden everyone started to believe in one another,” said Kendal following the championship run. “Team effort came into it all the way down the line.”

Following the 1989 season Kendal was named the CJFL Gordon Currie Coach of the Year.

For an encore in 1990, the start of a new decade Kendal again working his Colts magic at the helm leading his club to a 6-2 record and seeded second heading into the playoffs.  After taking down the Hilltops in overtime in the semis, they faced the top seeded Rams in the Conference final and for the second straight season sent them packing with a 45-14 victory.

In the national semi-final the Colts easily took down the BC Conference champion Surrey Rams 49-11, in BC before travelling to Windsor to face the AKO Fratmen for their second straight Canadian Bowl.  They made quick work of the home side, stomping them 50-15 to retain the national title, making Kendal a back to back championship head coach.

In 2018 Kendal and those Colts teams were inducted into the Alberta Sports Hall of Fame.

After leaving the Colts in the early 90’s, he returned to the organization in 2006 and led them for another five seasons including 2011 when he was 72 years young.  He was named the Prairie Conference Coach of the Year in 2007 and 2008.

In all, Kendal coached the Colts for 11 seasons leading them to their only national titles.  He is a CJFL Legendary Coach. 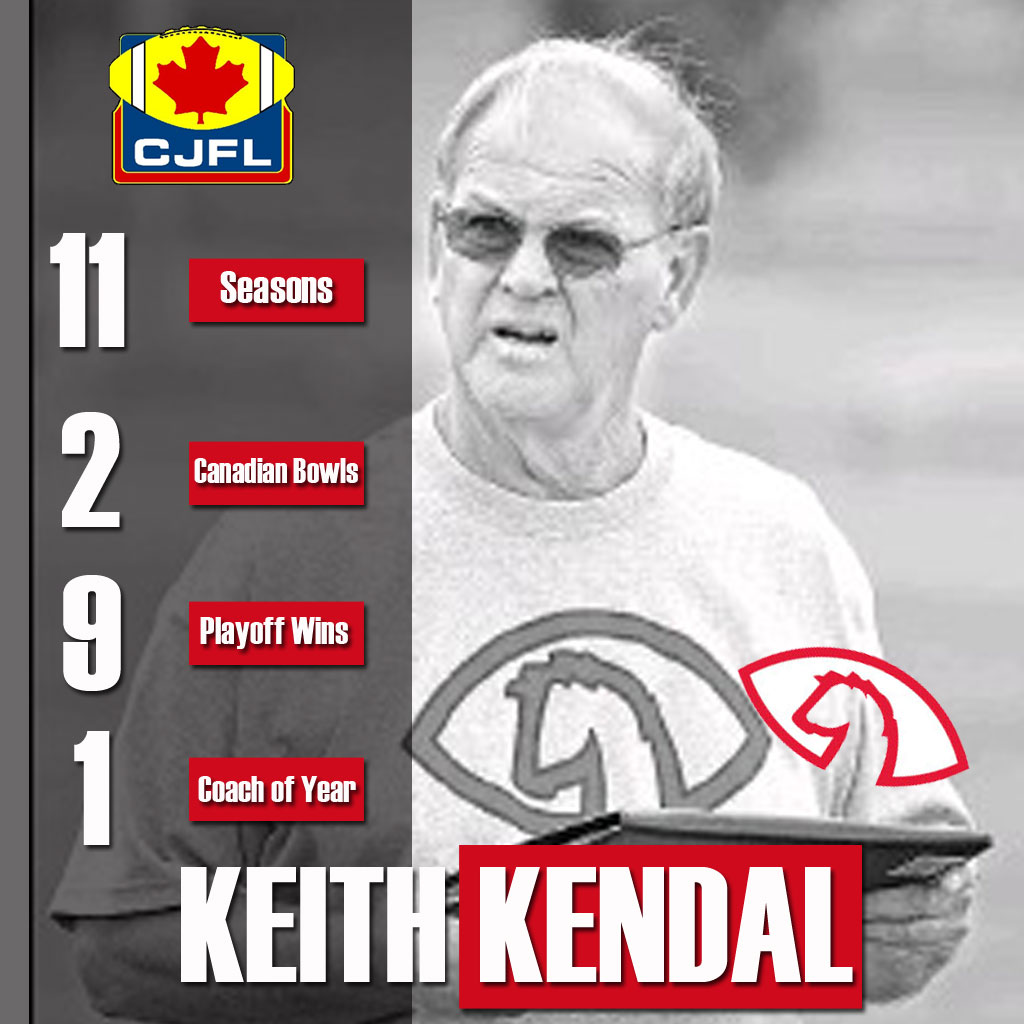